Without a doubt, Prague is one of my favorite cities – everything about it is special, and I’m so happy to be here again ;o)! My small Czech hotel is in a quiet residential district not far from the Castle Complex and Charles Bridge. It’s perfect and only two-minutes to tram connections.

I arrived in Prague on May 8, the date of the V-E Day Celebration, also called Victory in Europe Day.  “The day signifies the victory of the Allied forces against the Axis forces at the end of World War II in 1945.” The Czech Republic celebrates this day as the day they were freed from Nazi rule.

Today I purchased a 30-day transportation pass for about $24. It takes me anywhere, including outlying areas I didn’t explore during a visit in 2013. Enjoyed blending and interacting with locals today and was spoken to in Czech, German, and French. ;o).

The weather is chilly and supposed to remain that way for a few days and then warm up during the weekend. I don’t mind the cool weather, but Air Berlin lost my baggage and I only have one set of clothes – thank goodness it includes a jacket. The luggage still hasn’t appeared but the hotel says this happens often and that it will eventually show up….

The hotel said to try to avoid Air Berlin in the future – how was I to know? I’m taking it in stride but the luggage has things intended to last for a year of traveling. It will be upsetting if they don’t eventually turn up. Don’t want to dwell on it or let that dampen the sheer delight of being back in beautiful Prague!

There is a popular jazz club U Malého Glena nearby in Malá Strana and I stopped by this afternoon and reserved a seat for tomorrow night. Najponk Trio is performing and I’m excited. The talented pianist is said to have three drummers who take turns playing. It’s a small, intimate venue, and the audience and artists are close during performances.

There are lots of live performances in Prague during spring and summer. On Saturday evenings, classical music concerts are conducted at the beautiful Church of Our Lady before Týn. A Black Light Theatre performance and another concert at the Rondolfinum are also on the list. 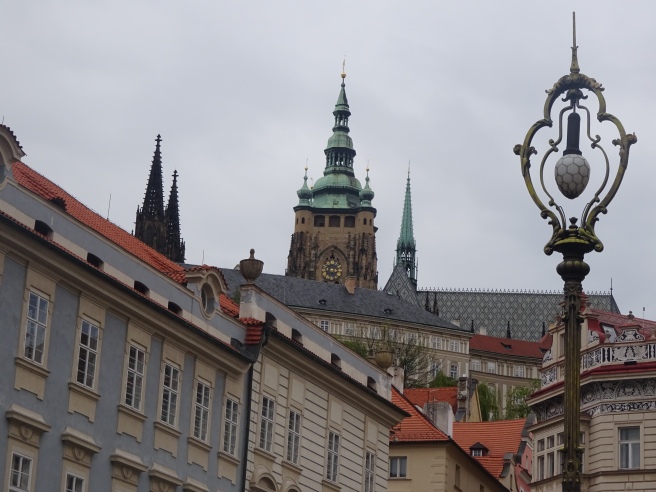